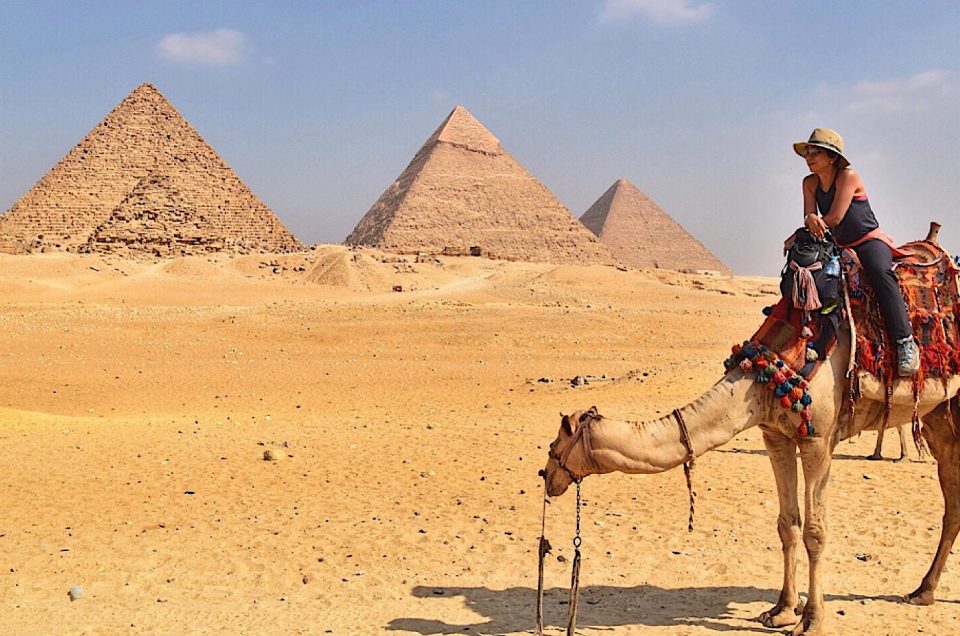 The creativity and glory of ancient Egyptians appear in small details they left to tell their own stories and immortalize themselves to the following generations. These details can be seen in every monument they have built, pyramids, temples, tombs and in every piece of art they have created and achieved. Here are the 10 most ancient monuments to visit while your holiday in Egypt……

One of the iconic female characters of all time is Queen Hatshepsut who ruled the kingdom for a very long time and was remarked by Egyptologists as one of the most successful pharaohs in the history. The Queen built herself a temple that is recently known as Hatshepsut temple located in Luxor city dedicated to god Amun.
Deir el-Bahari complex. The Mortuary Temple of Hatshepsut. “the Holy of Holies”. it’s One of the most fascinating temples of Egypt with incredible designs that reflect the respect of the Sun deity “Ra” and the strength of a wonderful queen. The temple of Queen Hatshepsut is one of the great funerary monuments of the ancient civilization, its geometrical design and layout for active worship marked a turning point in ancient Egyptian architecture. Hatshepsut temples one of the most important attractions in the top list of many travellers.

Snefru built two large pyramids at Dahshur. His first, known as the ‘Bent Pyramid’, is situated to the south of the necropolis while his second monument at Dahshur is about 4km to the north and known as the ‘North’ or ‘Red Pyramid’. The monument whose ancient name was probably ‘Snefru Shines’ was to be Snefru’s third attempt at pyramid construction (including Meidum). The valley temple was excavated in the 1950s by Egyptian archaeologist Ahmed Fakhry (who also investigated the pyramid). The monument has been visited since the Middle Ages and was investigated by Perring and Lepsius in the mid 1800s. Petrie and Reisner included it in more modern studies. More recent excavations have been undertaken by the German Archaeological Institute of Cairo, directed by Rainer Stadelmann since 1982.

Was the principal necropolis for the ancient city of Memphis where, from Dynasty I onwards, the Egyptian elite built their tombs. The area is best known today as being the site of the first stone pyramid, built for a king of Dynasty III . The pyramid has been attributed to a King Djoser since the New Kingdom of ancient Egypt. Giza, the archaeological area of Saqqara necropolis, Egypt.


Is a large Ancient Egyptian temple complex located on the east bank of the Nile River in the city today known as Luxor (ancient Thebes) and was constructed approximately 1400 BCE. In the Egyptian language it is known as ipet resyt, “the southern sanctuary”. In Luxor there are several great temples on the east and west banks. Four of the major mortuary temples visited by early travelers and tourists include the Temple of Seti I at Gurnah, the Temple of Hatshepsut at Deir el Bahri, the Temple of Ramesses II (a.k.a. Ramesseum), and the Temple of Ramesses III at Medinet Habu; and the two primary cults temples on the east bank are known as the Karnak and Luxor. Unlike the other temples in Thebes, Luxor temple is not dedicated to a cult god or a deified version of the king in death. Instead Luxor temple is dedicated to the rejuvenation of kingship; it may have been where many of the kings of Egypt were crowned in reality or conceptually (as in the case of Alexander the Great who claimed he was crowned at Luxor but may never have traveled south of Memphis, near modern Cairo.)
To the rear of the temple are chapels built by Amenhotep III of the 18th Dynasty, and Alexander. Other parts of the temple were built by Tutankhamun and Ramesses II. During the Roman era, the temple and its surroundings were a legionary fortress and the home of the Roman government in the area.

Built by Pharaoh Sneferu, the Red Pyramid is the world’s first successful attempt at constructing a “true” smooth-sided pyramid. At 104 meters it is the 4th highest pyramid ever built in Egypt. What really makes the Red Pyramid special today is the lack of crowds that plagues the Giza Plateau and the comparatively unregulated interior access.

4. The Valley of the Kings

Is a valley in Luxor where, for a period of nearly 500 years from the 16th to 11th century BC, tombs were constructed for the kings and privileged nobles of the New Kingdom. The valley contains 63 tombs and chambers, ranging in size from a simple pit to a complex tomb with over 120 chambers. The royal tombs are decorated with scenes from Egyptian mythology and give clues to the beliefs and funerary rituals of the period. All of the tombs seem to have been opened and robbed in antiquity. Only the famous tomb of Tutankhamun was spared from the worst of the tomb depredations.

Abu Simbel Between the legend and the historical importance, Abu Simbel temple is one of the world’s most breathtaking ancient monuments, it is the perfect example for the endless-ambition of the ancient Egyptian who built it and also a model for modern engineering. The Great Ramses II built another one beside his temple as a symbol of his immortal love for his favorite wife queen Nefertari. It is truly an amazing place to visit during your holiday in Egypt with so many details.
They successfully relocated them with the help of UNESCO to a spot 60 meters above the cliff. Discover more about this process which took four years to make this miracle can be witnessed today.

Karnak is the biggest temple complex in the world, covering an area of 100 hectares. Much of it has been restored during the last century and our knowledge of the buildings here in different periods of Egyptian history is still increasing each year. In ancient times, Karnak was known as Ipet-isut. The Karnak Temple Complex, commonly known as Karnak, comprises a vast mix of temples, chapels, pylons. Construction at the complex began during the reign of Senusret I in the Middle Kingdom and perhaps before that and continued until the Ptolemaic period, the temples are built along two axes (east-west and north-south) with the original Middle Kingdom shrines built on a mound in the center of what is now called the Temple of Amun, although most of the extant buildings date from the New Kingdom. The area around Karnak was the ancient Egyptian Ipet-isut (“The Most Selected of Places”) and the main place of worship of the eighteenth dynasty Theban Triad with the god Amun as its head. It is part of the monumental city of Thebes. The Karnak complex gives its name to the nearby, and partly surrounded, modern village of El-Karnak, 2.5 k.M (1.6 miles) north of Luxor.

The Great Pyramids, is the northern extension of the necropolis of Memphis, situated on the west bank of the Nile and is today part of the suburbs of modern Giza. The Giza Plateau is famous for three pyramids. Khufu’s son, Khafre ‘Chephren’ also constructed a pyramid next to his father’s monument. The third pyramid belongs to king Mankaure (Greek, Mycerinus). The Dynasty IV king Khufu ‘Cheops’ was the first to construct his pyramid at Giza – the monument we now call the ‘Great Pyramid’ – the only surviving structure of the seven ancient wonders of the world. Khufu’s pyramid was the tallest building in the world until the early part of the 20th century AD. But the construction remains unique on the ground and in its shape to our time. It is the oldest and largest of the three pyramids standing today at the Giza plateau in Egypt. The Great Pyramid is argued to have been built as a tomb, archeologists estimate that it has been constructed and completed in a  20-year-long. Most Egyptologists agree that the pyramid lost its capstone, also known as its pyramidion sometime in the distant past. The Great Pyramid weighs 6 million tons, its footprint is 13 Acres, 2,5 million individual blocks of stones were used in its construction, some of these blocks are weighing 70 tons and has been raised about 90 meters above the ground, the average blocks weighs around 2,5 tons, the Great Pyramid targeted to the true north. The pyramids of Giza have always fascinated mankind and a great many mysteries have been built around them.

The Sphinx statue. The colossal statue takes the form of a crouching lion with a human head, the body of the Sphinx, almost 60m long and 20m high, was carved from alternate soft and hard layers of sediments of marly limestone laid down during the formation of the Giza plateau. The head of the Sphinx represents an Egyptian ruler wearing a nemes head-dress and once had a uraeus-serpent on it’s forehead and a royal beard, “fragments now in Cairo museum”.
The famous gigantic statue of the Great Sphinx rises from the Giza plateau adjacent to and directly north of Khafre’s valley temple. When Napoleon Bonaparte arrived in Egypt in 1798 he was very impressed by the statue of the Sphinx, though by this time it was again covered by sand. His scientists excavated the monument, discovering the Dream Stela in the process in 1816.

The Valley Temple was built on the edge of the desert escarpment, and was the place of reception for the royal body. The Valley Temple of Khafre at Giza complex is remarkably one of the best preserved temples or structure from the Old Kingdom in Egypt, particularly the Fourth Dynasty. After being buried by desert sand, it was cleared of sand in the nineteenth century. Such an absolute wonder of engineering it is, and a masterpiece of ancient Egyptian monumental architecture as well. Its distinctive architectural style identifies it as being among the oldest stone buildings in Egypt, if not the world.

Enjoy the magnificent view of Giza plateau from Py

Abu Simbel Between the legend and the historical i

The Great Pyramid of Giza! www.kemetexperience.com

Valley of the kings, Luxor, Egypt 🇪🇬 The las